A Psychologist’s Perspective: Why Radar Speed Signs are Effective in Reducing Speeding 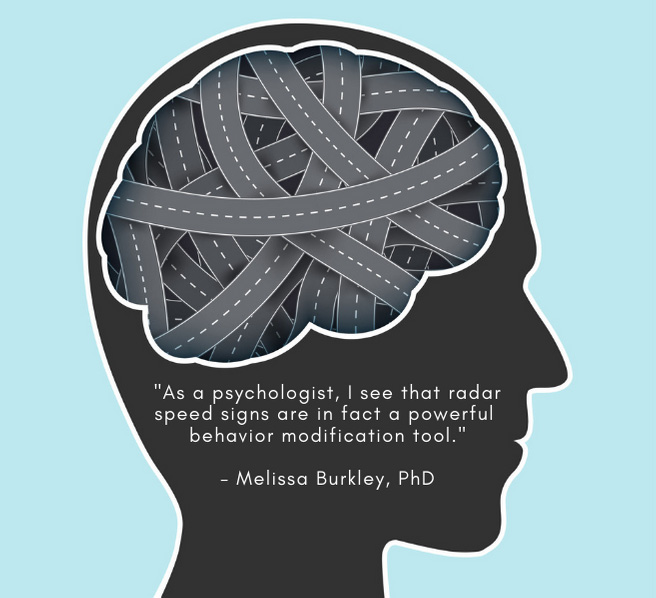 In the last few years, we have seen an explosion of technology designed to make driving safer. Rearview cameras and blind spot warnings alert us to unseen dangers. Electronic stability control prevents us from sliding on slippery roads. Automatic emergency braking anticipates impending collisions and brakes to avoid them.

Yet, after years of decline, traffic fatalities have sharply risen over the past two years. What is responsible for this sudden uptick?

The answer is shockingly simple: speed.

According to a decade-long study conducted by the National Transportation Safety Board (NTSB), speeding accounts for 31% of traffic fatalities—nearly the same amount caused by drunk driving). As NTSB chairman Robert Sumwalt put it, “You can’t tackle our rising epidemic of roadway deaths without tackling speeding. Speed kills.”

So how do we get drivers to slow down to stop this growing national crisis?

One particularly effective approach is the radar speed sign. Their design may appear simple, but, as a psychologist, I see that radar speed signs are in fact a powerful behavior modification tool. This is because they produce a number of psychological changes in the mind of the driver.

Unlike typical street signs that only post the speed limit, radar speed signs also display the current speed of an approaching motorist. By providing such feedback, these signs ignite what psychologists call a “feedback loop.”

The basic premise of a feedback loop is this: people are more likely to change their behavior if they are given feedback about their actions, followed by an opportunity to change those actions.

Sounds simple enough, but don’t let that simplicity fool you. Feedback loops are highly effective at modifying behavior because the human brain is hardwired to respond to them. They are the primary way our brains learn. Just think back to when you were a child. Much of what you learned, be it arithmetic, social skills, or hitting a baseball, was probably through the trial-and-error process of a feedback loop. Feedback is so integral to the way our brain works that we seek it out, crave it, even get a tingle of satisfaction after we get some.

So if we want to produce real-world changes in behavior, we need to find a way to tap into this hardwired process and harness its power. When it comes to reducing speeding behavior, radar speed signs do just that. They provide us with information about our initial action (you’re driving too fast) that serves as input to our reaction (I need to slow down). And when we see our speed immediately drop in response, we get a little jolt of reward. 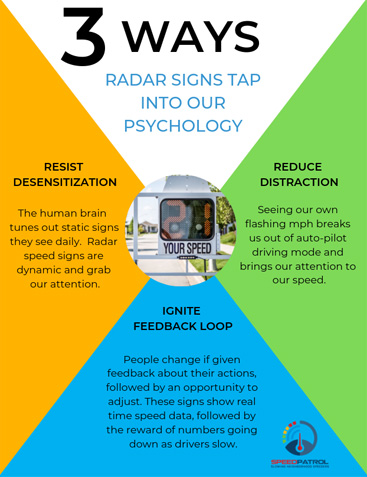 Not all feedback loops are created equal. In order for a feedback loop to have an impact on our behavior, its feedback must be immediate and personalized. For example, imagine your child is struggling with their math homework. If all you said was “that’s wrong,” your feedback would do little to help. It would be far more effective if you offered specific, personalized feedback, such as, “look here, you forgot to carry the two.”

The same is true of adults. We are far more likely to modify our behavior if we receive immediate, personalized feedback regarding our actions. That is why there has been an explosion of monitoring technology in recent years—from activity trackers to toothbrushes—that provide specific, real-time information to assist us in our goals.

That is exactly what radar speed signs do for our driving—they provide us with personalized, real-time data about how our driving compares to the posted speed limit. Such feedback is especially important since people consistently overestimate their driving skills and underestimate how much they speed.

The human brain becomes desensitized to repetitive stimulus (psychologists call this process “habituation”). That means when we see the same, static “school zone” sign or “20 mph” sign over and over, our mind starts to ignore it. After a while, we don’t even register seeing it.

Brain scan research backs up this claim. According to such studies, our brains literally shut down and become less active when we are driving along a familiar route. They essentially go on auto-pilot.

So the more something in our environment is dynamic and constantly changing, the more we are likely to notice it. That is where radar speed signs come in. Each time we pass them, they flash a new piece of data. Their feedback is a constantly changing stimulus in our otherwise static routine, which means we are less able to habituate to them. As a result, our brains are more likely to take note of their warning and adjust our behavior accordingly.

Distracted driving is something we have all experienced. If you have ever pulled into your driveway after a long work day and were so lost in thought that you don’t remember the drive home, you know what this feels like. The reality is that never before in human history have drivers had to contend with so many distractions. Cell phones, text messages, eating on the go, billboards, podcasts, audio and climate controls—the list goes on and on. Given all of this, it is no wonder we sometimes lose track of our speedometer’s reading.

What radar speed signs do is effectively snap our focus back to the road. Seeing our own flashing mph immediately directs our attention to our own speed. It also reminds us of the negative consequences that could result from this behavior. As a result, we are much more inclined to let up on the gas.

So clearly radar speed signs have a number of psychological benefits, but do they actually work?

The answer is yes. Studies show radar speed signs reduce speeding by 5-10%. Even better, their impact on drivers’ behavior has been shown to endure for several miles after the sign has been passed. Given this, it comes as no surprise that police officers and safety experts rate these signs as the number one tool for producing an immediate and long-lasting reduction in speeding, according to lawofficer.com.

As a psychologist, I clearly see the benefits of radar speed signs. They give drivers invaluable feedback in a way that prevents habituation and reduces distracted driving. And once that information is presented, it kick starts a feedback loop that compels drivers to react. Because the truth is, we all want to obey the traffic laws, avoid a ticket, and do no harm. Our brains just need a little nudging reminder when our behavior starts to stray into dangerous territory. Lucky for us, there’s a sign that does just that!

Melissa Burkley holds a Ph.D. in psychology from the University of North Carolina at Chapel Hill. She has published over 30 scientific journal articles and chapters and is author of the book Motivation Science. Her research has been featured in a wide range of national media outlets, including The New York Times, Cosmopolitan, Marie Claire, Esquire, and Men’s Health. She writes a popular blog for Psychology Today and has also appeared on Oprah Radio and Martha Stewart Radio.