A New Solution to Slow Speeding Drivers in Your HOA

You would expect your Homeowners Association (HOA) residents to drive safer the closer they get to home and you would hope that non-resident drivers—that benefit from your neighborhood’s ability to shorten their commute—would respect the speed limits as they cut-through each day. However, unique conditions make speeding prevalent in neighborhoods.

Since residents travel their home streets daily, commutes can become “autopilot journeys.” When on “autopilot,” drivers are unaware that they go over the speed limit, don’t stop at crosswalks, roll through stop signs or brake too late—sometimes they don’t even remember driving home. Since neighborhood streets are transition points from higher-speed roads, drivers also may not readily realize how fast they are still going.

Non-residents, who shortcut through residential streets to avoid traffic or to shave off a few seconds compared to another route, compound local speeding issues. You can bet that someone who is in such a hurry isn’t paying attention to your local speed limits.

Compounding the issue, distracted driving has now surpassed speeding and drunk driving as the top cause of motor vehicle accidents. It is a growing epidemic, impacting the safety of residential streets. As drivers leave and return home on streets with slower speed limits, they may feel “safe enough” to check a text, look up Google Map directions or select a music playlist. Unfortunately, it only takes a second or two with eyes off the road to miss stopping at a crosswalk or not see a dog running into the street.

Do you see what unites all of these unsafe neighborhood driving habits? The answer is inattention.

So how do you get the attention of motorists who drive through your community and get them slow down? HOAs can use what are called traffic calming solutions—tools and strategies to control traffic and create a safer environment.

The traffic calming tools that HOAs can advocate for or implement themselves to improve local traffic safety vary based on the language of their governing documents, road layout, community size, regulations of their municipality—unless the HOA is a private community—and, of course, budget.

Solutions range from permanent road changes that force drivers to slow down like speed bumps, roundabouts and rumble strips to less intrusive approaches that coerce a driver to “let off the gas” like traditional, static signs or driver feedback/radar speed signs. Private communities have an additional menu of options including installing entrance gates, hiring private security, buying a radar gun, giving out private tickets and more.

Common traffic calming solutions vary widely in terms of budget, effectiveness, community disruption and ease of implementation. However, a proven stand-out solution for breaking through the driver inattention, which is at the root of so many local speeding issues, is the radar speed sign. 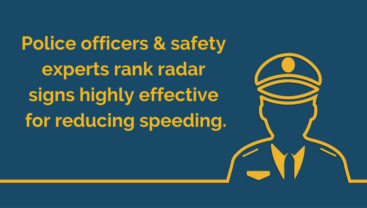 These dynamic signs show real-time speed data for each vehicle in large, bright and flashing numbers. They give immediate, personalized feedback that breaks through driver “autopilot” mode.

In fact, a 2017 study of police officers and safety experts ranked radar signs the highest for having the most immediate and long-term effect on speeding. Speeding citations went down by 66% in the first six months of installing a radar sign.

While the technology has been around since the 1990s, driver feedback signs have grown in popularity over the last decade. They are well-received by drivers and communities alike because they are highly effective but don’t impede emergency vehicles, require road construction to install or lead to costly vehicle maintenance. Radar speed signs offer the added benefit of portability, and they even capture driver data to gather valuable information on speeding habits of drivers in your community.

A go-to method for municipalities, these signs typically range from a couple to several thousand dollars, putting them out-of-reach for most HOAs and individual homeowners. However, a new re-packaging of radar speed sign technology at a much lower price point is now an available option for HOAs, apartments and condominiums, vacation communities, senior living complexes and more.

When strategically placed, these driver feedback signs can serve as triggers, stimulating drivers to transition from autopilot to attentive. The new Speed Patrol driver feedback sign is arguably the most effective traffic calming solution under $1000. Since three or four can be purchased for the price of one traditional radar speed sign, HOAs can purchase and install multiple signs throughout the community. Since they are lightweight and portable, the Speed Patrol signs can be rotated between different problem areas or temporarily used for community events.

Creating a culture of safety in your HOA community

The impact of a traffic calming tool like a radar speed sign can be magnified by coupling it with a neighborhood driver safety campaign. Communicating with residents about a community-wide commitment to improve driver safety brings the issue to the forefront, helping residents pay more attention of their own, often automatic, driving patterns. And through increased community discussions spread through word of mouth to drivers outside the community who frequently pass through.

A study by the International Association of Traffic and Safety Sciences found that road safety education campaigns in isolation weren’t likely to alter driving habits. However, the study reported that automatic driving behaviors can be successfully altered by “timing your message to be delivered at the precise moment when people are prone to reevaluate their habits.” The personalized, immediate feedback provided by passing a radar speed sign on a daily commute can be just that trigger.

According to the study, “local, personally directed campaigns that show by far the biggest effect on road accidents.” Speed Patrol offers an add-on, the Speed Patrol Safer Community Kit, which includes resources for a social media campaign and email communications, design files for a print postcard and educational flyers and more. These tools introduce residents to the new signs for increased buy-in, reinforce an HOAs commitment to a safe community and educate on powerful traffic safety statistics and tips.

In addition to the educational benefit, a communications campaign can unite a community by promoting safe driving conversations with neighbors and family and even on social media pages.

In the United States, one in five residents lives in an HOA and depend on their association to help promote a safe and enjoyable living environment. Road safety issues are widespread and significantly impact a community, but solutions that an HOA could afford or directly implement historically were limited. The new consumer-priced Speed Patrol sign finally puts a proven and powerful tool in the traffic calming toolbox of HOAs.